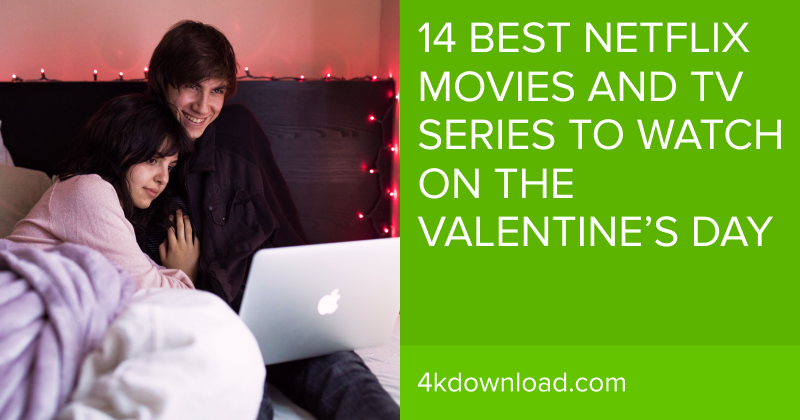 Whether you celebrate Valentine’s Day or not, you can’t deny this is the perfect day to spend watching nice movies and shows sitting on a comfy sofa with someone you love.

If you can’t find a movie for this romantic evening, look no further than this piece: here 4K Download gathered it all: 15 sweetest movies to stream on Netflix on Valentine’s Day - from comedies and mushy romances to proper thrillers and dramas.

Two single strangers who don’t like holidays decided to accompany each other on every major event throughout the year, Valentine’s Day including. If you hate being single on the holidays as well, Holidate is definitely a must-watch.

Grab your pet and turn on Netflix to watch this heart-warming comedy about a luxe hotel for dogs in need. Don’t forget to fetch a snack for you and your pet, and enjoy the tale.

A vet Henry falls for a woman and thinks he has finally found a girl of his dream. But then he discovers she’s got short-term memory loss: the girl forgets him the next day. A great comedy that walks you through deep emotions this V-day!

Scott Pilgrim vs. the World

The movie shows Scott Pilgrim, a sweet and misguided young man who crushes on a delivery girl Ramona Flowers. But he can’t date her until he defeats (like in video games) her seven evil exes who are coming to kill him. As Scott gets closer to Ramona, he must face increasingly vicious ghosts from her past—from infamous skateboarders to vegan rock stars and fearsome identical twins.

A regular work trip of Harper to Ibiza suddenly turns into an endless partying and drinking. But what happens in Ibiza stays in Ibiza.

If you're looking for a traditional heart-stopping romance and all that it entails, look no further than Outlander TV series. The show tells a story of Claire Randall, a married former WWII nurse who has fallen through time and finds herself back in 1743. She ends up falling in love with a rugged Highlander named Jamie Fraser. The drama walks us through the love of these two and struggles of a 20th-century girl’s life in 1743.

The Theory of Everything

This biopic of the famous physicist Stephen Hawking focuses mainly on his romantic endeavours with his wife Jane Wilde, the arts student he met when studying at Cambridge in the 60s.

Always Be My Maybe

This love story is a reunion one. Focused on two ex-lovers who meet again 15 years later, it’s a great way to think about how people can change and deny the obvious throughout the years.

Eat Pray Love is a story about escape, searching a true self and love. Elizabeth Gilbert who seems to have it all - a successful career, loving husband, and nice house - finds herself divorced and unsure of where to go next. She decides to travel around the world to find out who she really is and what she wants.

After losing her job and her boyfriend, an American girl takes part in a contest and wins a rural, crumbling inn in New Zealand. She forsakes her life in San Francisco, moves across the globe, and falls in love with the contractor who's helping her fix up the building. She is to make up her mind if to keep on with this new life or return to the life she has left behind.

The End of the F***ing World

The story follows two 17-year-old outsiders, James and Alyssa, embarking on a road trip to find Alyssa's estranged father, who left her when she was just a child. James, who's sure he's a psychopath, decides it's time to move from killing animals to something bigger, already with a target in mind. Together, they get caught up on a path of brutal events that become more dangerous as their journey proceeds.

This semi-autobiographical comedy series is about Mae, a Canadian stand-up comedian living in London who starts a relationship with her new love - a neurotic woman named George, who has never been in a relationship with another woman before. Mae is a recovering addict whose new addiction is George.

This movie is about a guy who goes back to his hometown and runs into his old love, starting a chain of events that make them realize they still love each other. But they both have their own lives now. An obscure ending keeps things open-ended to plot the story to your liking.

There’s nothing better than a good thriller to get you in the cuddling mood. Based on the Stephen King’s eponymous novel, Gerald’s Game sees a married couple who try to spice up their marriage in a distant lake house, but things go wrong almost immediately.


Read next:  How to Find Out Who Unfollowed You on Instagram and Unfollow Them in Bulk