How to Take a Screenshot on Any Operating System and Device 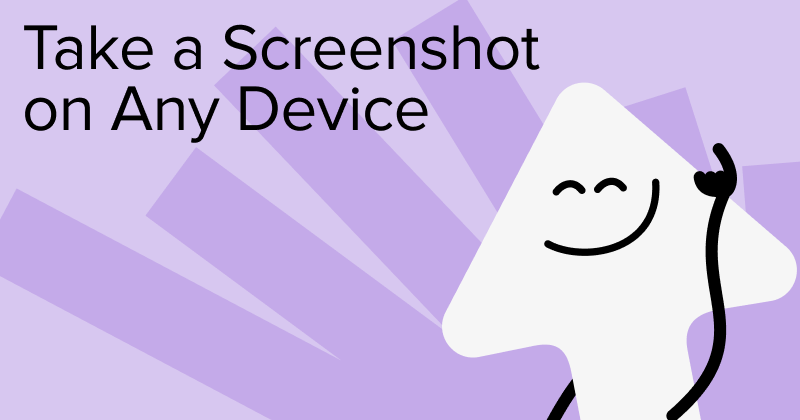 If you need to screengrab something on your smartphone or desktop, there's a wealth of tools that allow you do exactly that. All smartphones, laptops, computers, tablets, and operating systems have built-in functionality for screenshots. There are also third-party tools and browser extensions that can come in handy to do the job.

So with no further introduction, here's how you can screen-capture on various devices and operating systems.

This approach works for every version of Windows, including Windows XP, 95, 7, 8 and all others. There's a special key on Windows computers that are designed for screen-capturing — Print Screen.

It can be named differently, depending on your keyboard and country: Print Screen, PrtSc, or PrtScn. You can find the button in the top right corner next to the F12 key.

Note that on newer keyboards, you need to hold down the Fn or Function key together with pressing the Print Screen key to grab the screen.

The disadvantage of using the Print Screen key is that it captures your whole screen with everything on it. You can then paste the screen directly to email, social media, or messenger.

To crop the screenshot, open it in any editing tool of choice and crop it.

Use this cheat sheet to know how to make screenshots on Windows devices. 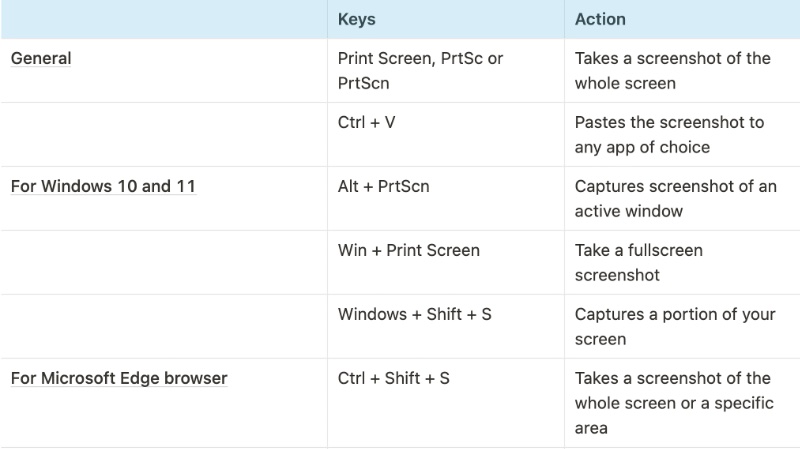 How to Save and Share the Screenshot on Windows

To share a screenshot taken with Print Screen, you need to paste it into your photo editing software: Microsoft Paint or any other application of choice.

Open Paint on your device and press Ctrl + V to paste the screenshot or right-click and select Paste from the dropdown menu.

In Paint, you can edit the file as you want before saving it in the image format you need.

To save the file, press Ctrl + S on your keyboard.

To share the screenshot, press the print screen key, paste it in, press Send, and it's on its way.

Take a Screenshot on Windows 7 and 8: Windows Snipping Tool

On Windows 7 and 8, you can take a screenshot with the Print Screen key or the Windows Snipping Tool.

Beyond the Print Screen key that captures the entire screen, there's also a way to screengrab with the Windows Snipping Tool. It's available for all recent Windows computers. 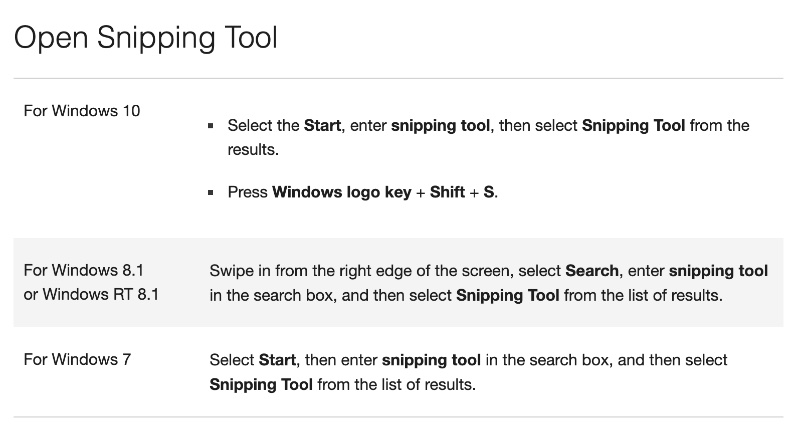 To find the tool on your device, look for it in the toolbar search: press the Windows key to open the toolbar and jump to Windows search.

Or you can use the Windows + S shortcut to open Windows search. Type in Snipping Tool and press Enter.

After typing the correct phrase, pressing the Enter key will automatically open the program.

It has different modes, including free-form screenshots, but the basic form is rectangular. Once you start the Snipping by clicking the New button, the entire screen goes grey. You can then select the area you want to capture and save.

After the screenshot is made, you can then edit it with the pen, highlighter, and eraser.

You can also email it directly from the Snipping Tool.

Take a Screenshot on Windows 10

The easiest way to make a screenshot in Windows 10 is to use the Print Screen key, which you can find on the upper-right side of your keyboard or next to the space bar. It screengrabs the whole screen.

If you need to paste it to any application, hit Ctrl + V.

To capture a window you just opened, tap Alt + PrtScn.

And if you want to select and screenshot a certain area on your screen, hit the Windows + Shift + S combo.

Let's consider some other ways of making screenshots on Windows 10 devices.

This application has a screenshot toolbar that makes the process of screen capturing quite hassle-free. Press the Shift + Windows Key + S combination to launch a toolbar and choose if you need to capture a full screen, a certain area of the window, or a specific window.

Find the app in the Start menu. It has the same screen capturing functionality as Snip & Sketch. 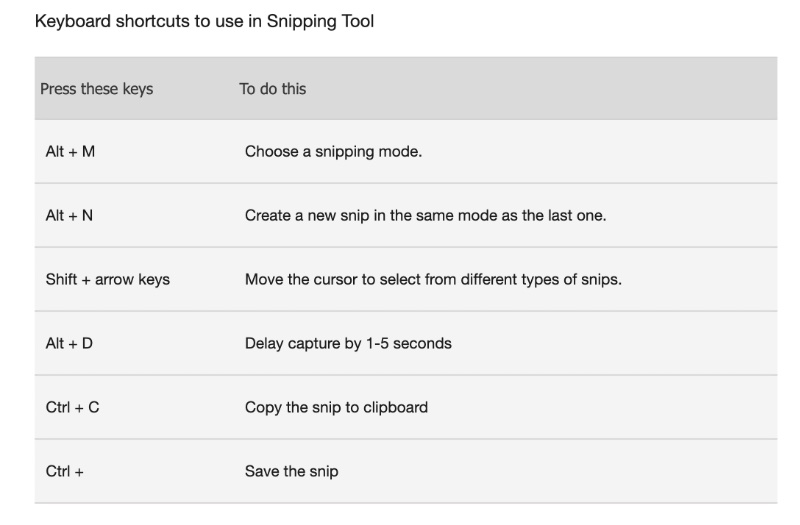 The application is designed to screen record games, but you can use it to make a screenshot.

Press Windows Key + G to launch the tool; choose the camera button in the Capture section to the Videos/Captures folder on your device.

Take a Screenshot in Windows 11

Windows 11 devices allow you to make screenshots with Print Screen to grab the whole screen and Windows + Shift + S to capture a portion of the screen.

Alternatively, you can use Snipping Tool and Snip & Sketch to control what exactly you want to capture.

Besides, you can assign the Snipping Tool with the Print Screen key from Settings > Accessibility > Keyboard. Then find Use the Print Screen Button to Open Screen Snipping box to open the screengrab tool instead of simply capturing your entire screen.

And just as on Windows 10, Xbox Game Bar can also be used for screengrabbing. Press the command Windows Key + G to open the tool, then click on the camera button in the Capture section to save the screenshot.

Instead, you can use the Windows Key + Alt + PrtSc combination to use the tool without even opening it.

Take a Screenshot on Windows Tablet

If you use one of the more recent Surface tablets, press Volume Up and Power simultaneously.

Take a Screenshot on iPhone

All iOS devices without a Home button — iPhone X, 11, 12, and 13 lines, iPad Pro and iPad Air — can capture screens if you simultaneously hold the volume up and a power button and then quickly release them. 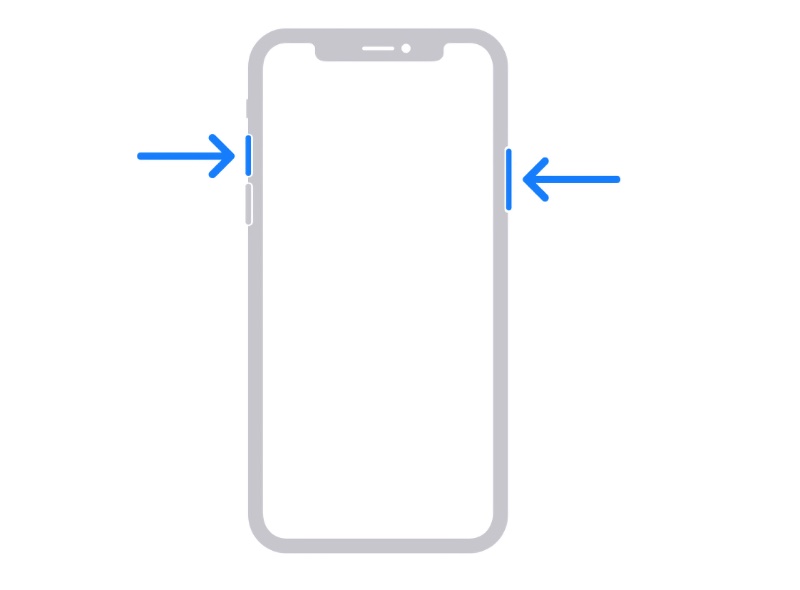 If your device has a Home button, hold it and the power button at the same time to make a screenshot. All the screenshots will be saved in your device library. 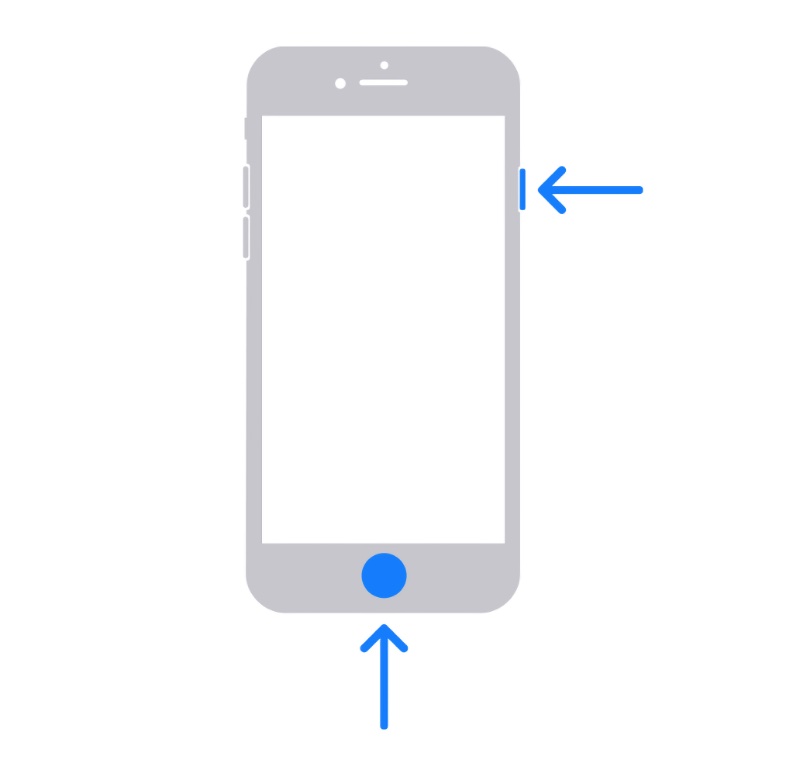 If you have an Apple Pencil, you can use it for screen grabbing as well: swipe up from the bottom corner with the Apple Pencil to capture the screen. Before taking the screenshot, you can manually choose which area of the screen you want to capture.

If you want to edit a screenshot — highlight something, draw, or add a caption — tap the thumbnail you'll see at the bottom of the screen. It will open tools that allow you to edit the image.

Take a Screenshot on Android

On most Android devices, you can take screenshots by holding down the power button and the volume down one. Alternatively, depending on your device, holding power and home buttons can also work. 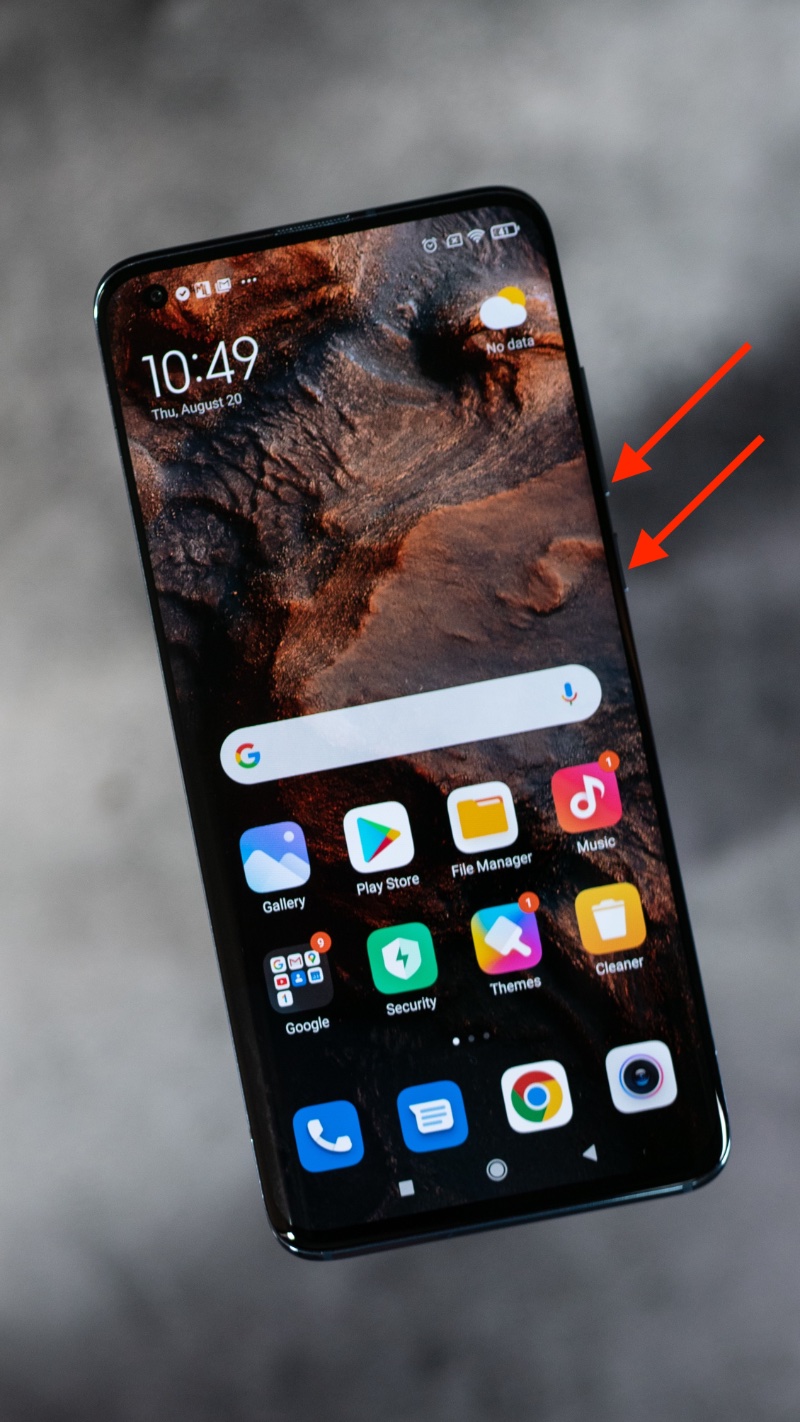 Some Android devices have a screenshot button in the pull-down menu. If you have a device with Google Assistant or Bixby, you can use the voice command to take a screenshot.

Samsung devices with the S Pen stylus, you can take a screenshot with the Air Command menu. Or you can use gestures to take screenshots. To turn it on, open Settings > Advanced Features > Motion and gestures > Palm swipe to capture. To do so, find the image you want to capture, make a gesture with your hand like you're about to karate chop the phone, swipe the side of your hand with the screen from left to right.

Beyond that, you can download third-party tools to take screenshots. Some solutions to name are Screenshot Easy or Apowersoft's Android Recorder.

Take a Screenshot on Apple Watch

On Apple Watch, you need to enable the feature beforehand to be able to make screenshots.

Then take a screengrab by pulling up the necessary screen, holding the Side button and clicking the Digital Crown at the same time. The screenshot will be saved on your iPhone's camera roll, not the watch itself. 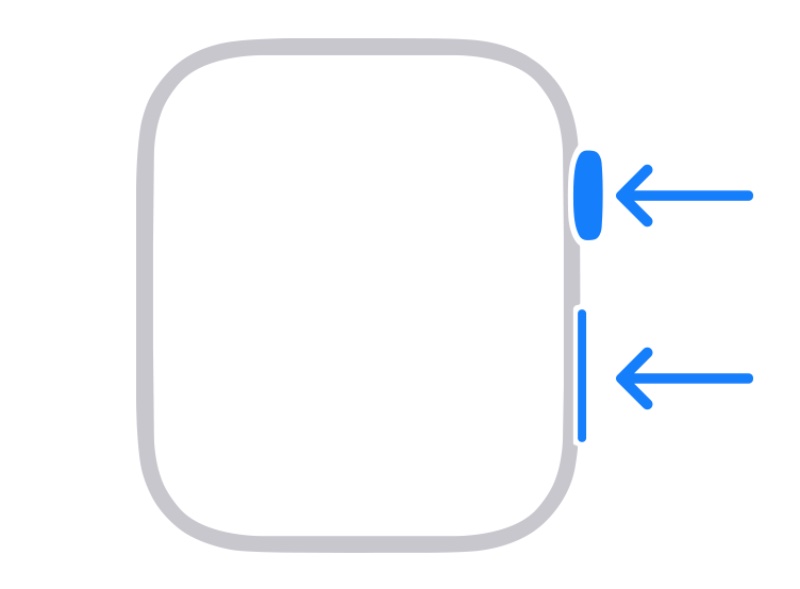 Take a Screenshot on Mac

On macOS devices run by Mojave and newer operating systems, you can use the combination of Command + Shift + 5 or follow the path Launchpad > Other > Screenshot to launch a screenshot tool. From there, you can control grabbing a screen on your Mac.

The tool allows you to screen capture the entire screen, a part of the screen, or a specific window.

Alternatively, you can use key commands to take a screenshot on Mac.

Here's a brief cheat sheet on how you can do it.

On Macs with a Touch Bar, press Command + Shift + 6 to take a screenshot.

The screenshots are automatically saved on the desktop.

If you'd better use a third-party solution, here are to name a few: Snappy, TechSmith Capture, Snagit, Skitch, or LightShot.

Take a Screenshot on Linux

There are many ways to capture what's on your Linux screen. In general, open the Activities menu, then Screenshot. Then you're allowed to choose between the whole screen, a specific area on the screen or a single window.

Another useful shortcut is Shift + Print Screen which allows you to capture a certain area on your screen. With the Ctrl key added to any shortcut, you can save the screenshot to the clipboard.

This is a tool available for Linux devices that allows taking screengrabs. To do so, open the app on your Linux device, then go File > Acquire > Screen Shot. There you'll see a few options: to capture the whole screen, a single window, screenshot with the time delay. The screenshot you take will be saved in the GIMP app for editing.

Take a Screenshot on a Chromebook

If you have a Chromebook keyboard, you can take screenshots with the Show Windows key. You can find this button at the top of the keyboard; it has an image of a box with lines next to it.

To make a screenshot, hold the combination of Shift + Ctrl + Show Windows, then choose Screenshot. You can then screengrab the whole screen, part of it or a specific window.

Once using any other keyboard, use Ctrl + F5 to capture the entire screen or Ctrl + Shift + F5 to take a screenshot of a specific area.

If you use the Chromebook in tablet mode, hold the power button and volume down key. Thus, you'll capture the entire screen.

Take a Screenshot in Microsoft Edge

The latest versions of Microsoft Edge have built-in functionality for taking screenshots.

All you need to do is open the browser, use the combination of Ctrl + Shift + S, open the Web Capture overlay, and pick either free selection or the entire page.

Take a Screenshot in a Web Browser