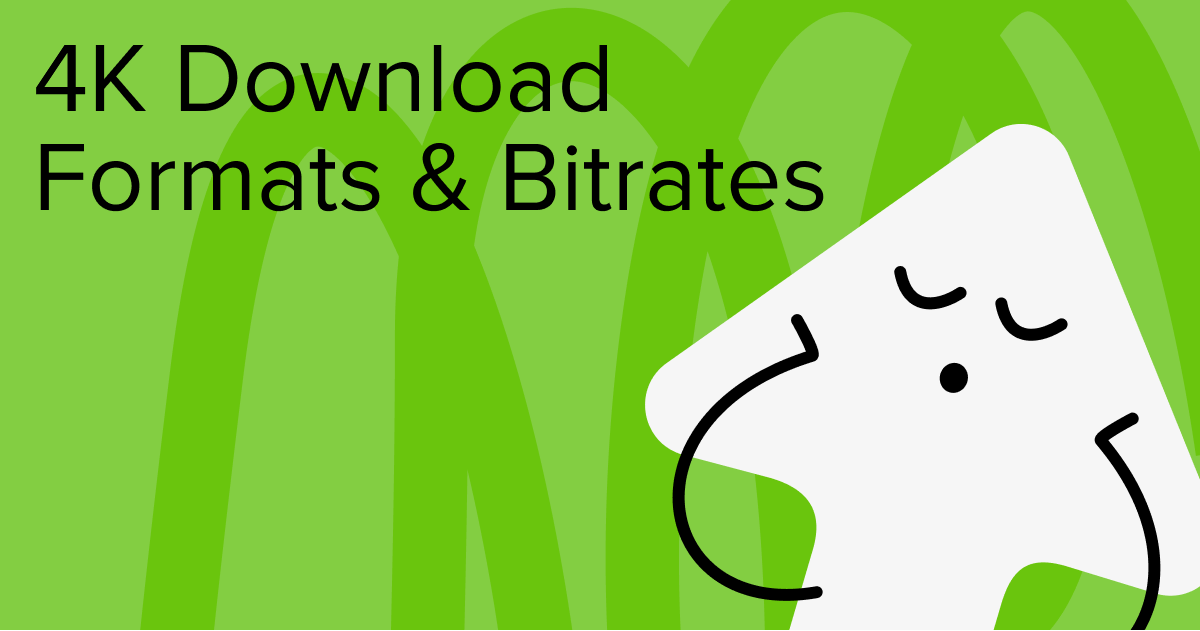 The 4K Download apps don’t save audio and videos in all possible digital formats, bit rates, and resolutions. Sometimes the capability is limited because the platform from which you want to download content doesn't allow you to do so. Sometimes it’s just a technical inability or a feature that is not yet implemented.

With no regard to the reason, we’ve compiled the formats, bit rates, and resolutions of audio and video content that can be saved with the 4K Download software. But before that, let us briefly remind you what a format, resolution and bit rate are.

What Is an Audio & Video Format?

A format is a container that stores audio, video, subtitles and any other metadata.

Formats are used to store video or audio on our device’s system. There are eight most common video file formats: MP4, AVI, MOV, WMV, FLV, WebM, MKV, and AVCHD.

As for audio formats, the most common formats are MP3, WAV, AIFF, AAC, FLAC, OGG, and WMA.

What Is a Bit Rate?

A higher bit rate delivers better-quality audio and takes up more space on a computer or mobile device. However, you may overlook the improved quality over a lower-quality one unless you have high-quality headphones or speakers. For example, if you're listening over a standard pair of earbuds, you probably won't notice the difference between a 128 Kbps file and a 320 Kbps file.

What Is a Resolution?

Video resolution is a measure of the amount of detail in a video, which determines how realistic and clear the video looks. The resolution is measured by the number of pixels contained in the standard aspect ratio of 16:9, which is the most common aspect ratio for television and computer monitors. The more pixels a video has, the higher the resolution is.

Which Formats, Resolutions & Bit Rates Can Be Saved with the 4K Download Apps?

You can download videos in the following formats, bit rates, and resolutions:

Why bit rates end on 256 kbps, you may wonder, even if similar services claim they can download 320 kbps audio from platforms like YouTube. As stated by a YouTube representative, the platform doesn’t stream audio at 320 kbps. In fact, even the best quality audio, exclusively available to Premium users, doesn’t get higher than 256kbps AAC. The representative claimed that 256kbps AAC is equivalent in audio quality to the 320kbps CBR MP3, but YouTube never actually stored or played videos with a 320 kbps audio stream.

Read next:  How to Install 4K Download Apps on Mac with M1 & M2 Processors