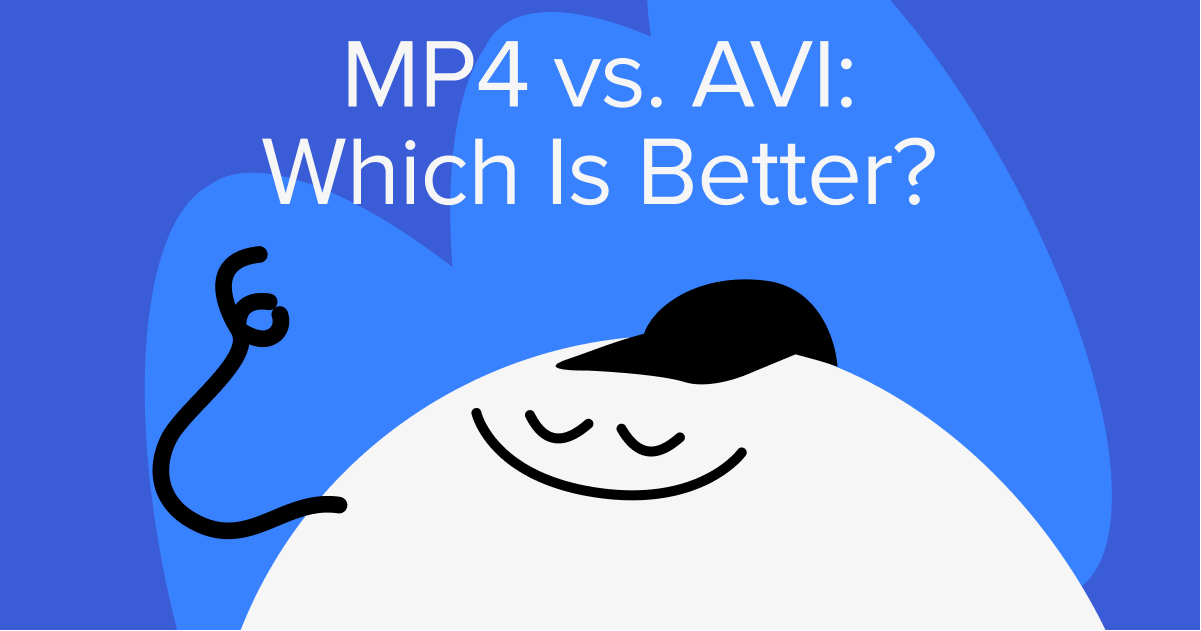 Every video we play on our devices has a unique video format. Such formats are used to store a video on our device’s system. There are eight most common video file formats: MP4, MOV, AVI, WMV, FLV, WebM, MKV, and AVCHD.

In this piece, we'll focus on MP4 and AVI, probably the most popular formats in which our video files are stored. Let’s dig deeper into the differences between the two, and define which is better to convert video content into.

To begin with, it’s useful to clarify what a video format is. In general, a video file format is a container that stores data and codecs, that is, things for compressing and recovering information.

Let’s start with the general review of these two formats, abbreviations and terms that stay behind them.

AVI stands for Audio Video Interleave. Basically, it’s a multimedia container built by Microsoft as part of its Windows for Video technology in November 1992. The conclusion that pops up is that this video file format is perfectly compatible with Windows players and other solutions that use the associated codecs. And since it was initially developed for Windows, it doesn’t have certain functionality of newer containers, the ones MPEG and MP4 have.

AVI files can be made up of both audio and video data within a file container that allows for synchronising audio-with-video playback.

All the videos saved in this format have the .avi extension at the end of the file name.

MP4 stands for the abbreviation for MPEG-4 Part 14. Just like AVI, MP4 is an old format that was released in 2001 by Moving Pictures Experts Group (the first capital letters make the abbreviation).

Many devices, players, and platforms support this format, if not all. MP4 videos can contain videos, audio, still images, and text data. The videos saved in this format are of high quality, notwithstanding the minimal file sizes.

The files of the MPEG-4 Part 14 may have many extensions at the end of their file name, with .mp4, .m4a, or .m4p being the most common.

Let’s start with the difference and similarities between the AVI and MP4 formats.

Codecs: One of the biggest differences that AVI and MP4 have is that AVI can only store HD and Full HD; meanwhile, MP4 can store 4K Ultra HD as well. AVI can’t support UHD codecs, HEVC / H.265 or VP9.

Subtitles: AVI, on its own, isn’t capable of storing subtitles. MP4, however, can support two types of subtitles, such as MPEG-4 Times Text and VobSub.

Now let’s focus on a more specific comparison and take the following facets into consideration: quality and file size.

The output quality you get when saving the file is an essential component of the comparison between the two formats.

Which is better quality-wise, AVI or MP4? There’s no difference visible to the bare eyes.

Both AVI and MP4 are video wrapper formats, but the codecs they’re associated with differ. AVI is associated with the DivX codec; meanwhile, MP4 uses MPEG-4 AVC/H.264 codec.

When you save a video file in AVI, the output quality is high, for intact AVI can save the alpha channel.

If the video is stored in MP4, the quality is also rather good because various compression codecs are used for encoding.

Thus, in terms of quality, AVI will be slightly higher than MP4.

Another facet many users pay attention to when saving video files on their devices is the size of those files. Which format to choose if you want to spare more space?

The AVI format compresses data more efficiently than MP4, so the file sizes are huge, weighing about 2-3 GB per minute of the video. You can compress AVI files to reduce the size by converting them to other formats, MP4 included.

But think twice before you do so, since MP4 is quite a lossy format.

Therefore, the resulting output file size of MP4 is a bit smaller than AVI.

Is AVI Better Than MP4?

As you now see, both video file formats have their own pros and cons, and to figure out which is better, you should define which facet plays a more vital role for you: quality or size.

Beyond that, when comparing AVI and MP4, we merely refer to their audio and video codecs, not exactly the containers themselves. Thus said, when it comes to quality, it seems like AVI wins but loses to MP4 size-wise.

We should note, however, that MP4 has a higher quality when it comes to the exact size, and MP4 is compatible with a larger set of devices.

How to Download MP4 Videos with 4K Video Downloader

Let’s see how you can download an MP4 file from YouTube. Downloading from other sites works quite the same.

1. Launch 4K Video Downloader. It's available for macOS, Windows and Linux, and Android.

2. Copy the video link from the browser.

Then it only remains to wait until the downloading is completed and play a downloaded video. That’s it!

Weiterlesen:  360° Videos — What They Are, How to Download & Play Them