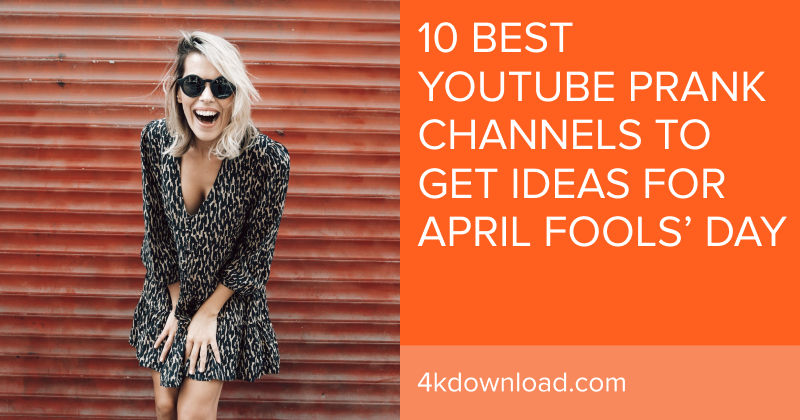 Have you ever pranked your friends? Regardless of your answer, you certainly know there are people who don’t do it for amusement; they earn their bread and butter by making pranks as large as real performances.

Just in time for April Fool's Day, 4K Download reveals a list of channels that have shared some of the most ridiculous pranks ever captured on video. Ranked by the quality and scale of their pranks, here are the top ten YouTube prank channels you can ideas from for your entertainment on the day of April Fool.

Roman Bernard Atwood is a popular prank blogger on YouTube. It won’t be unreasonable to call him and his channel the trendsetter among other prank YouTube channels.

Whether it’d be covering the entire house with toilet paper or devising a car crash, Atwood’s channel has an army of over 15 million followers!

Though his channel is currently inactive since 2006, his videos are still enjoyed, laughed at, and rewatched by people.

This is a Canadian television show with stand-alone prank episodes with hidden camera reels. And though it started as a show, Just For Laughs Gags now has a YouTube channel with more than 11 million followers.

Rahat Hossain is known all over the world due to his YouTube channel MagicofRahat. Rahat is a vlogger and prank blogger with doing magic tricks in his videos. His YouTube channel has devoted followership of over 7 million on YouTube.

Prank On is a YouTube channel that is entirely dedicated to various pranks and tricks. Here you can find all kinds of funny pranks, social experiments, and kissing pranks!

Rémi Gaillard is a popular French YouTube prankster. One of his greatest tricks was an appearance as a Lorient football player in the 2002 Coupe de France final match. Thanks to Rémi’s football skills he managed to go unnoticed!

Calling himself a Social Experimenter, Coby Persin is a male fashion model, actor and prankster. His early works were pranks and revelation videos around famous and pretty people. Later, he started doing social pranks, stunts and trolls.

This channel is your guide to pranks! This How to Pranks It Up channel gives you brilliant prank ideas with a demo watch! This channel is possibly the best prank space teaching people how to prank.

Whatever is all about pranks, social experiments, and crazy randomness. So subscribe to the channel if you’re looking for laughter.

Improv Everywhere is the channel of mob pranksters, playing pranks on people for the pleasure of laughter. This New York City-based group call their pranks “missions to cause chaos and joy”.

Jack Vales, an American prankster who loves to play pranks on people for entertainment and a living. While the majority of prank channels target the young generation, Vale’s videos can be viewed for laughter in a family get together.